Have you noticed that I have gone missing? Probably not but no, I didn’t enter the witness protection program. Sadly, I have had Covid-19 along with my family entire. One costly slip up and we were all infected along with baby Jack over Christmas. My fault. Tim Blanket fortunately had the weakest bout of it, kind of like a minor cold and I of course, because I’m extra, had the worst of it. Jack is fine despite having all the symptoms and his very scared and worried parents also being sick. I guess I would say that it didn’t hit me like a sudden shock, more of a gradual realization, like the onset of the flu, and confirmation when we lost our sense of smell. I never thought, while it was happening, that I would need to be hospitalized. We have a pulse oximeter so that we could blessedly check my oxygenation frequently. It never dropped below the normal range so that was comforting in and of itself. The most onerous symptom was the fevers, with accompanying teeth rattling cold spells, that came and went at unexpected moments. Fortunately it did respond to Tylenol, though I was worried that I was becoming addicted to my new best friend, Nyquil. Oh, and the intense fatigue and body pain that made it impossible to get out of bed. That was fun. In my mind I remembered being a kid, sick with the flu. I was curled up in a little twin bed in a tiny bedroom with orange and white wallpaper that I shared with my sister. I was swaddled in a wool scarf with the dog splayed across my feet and my mother administering a hot toddy—an Irish concoction that included whiskey, lemon and hot water. It seemed, idyllic, since I didn’t get much individual attention in those days. My life was a lot less than that one perfect image would suggest but that is how memory works, buffing and polishing the edges off the darker stuff. That is the kind of stuff you do think about while staring at the ceiling sick with Covid-19.

After almost three weeks of house arrest, we are all recovered and the department of Contact Tracing has officially closed our cases with the pronouncement that we have immunity of up to three months, maybe longer. It is weird to no longer be constantly looking over our shoulders for the grim reaper but every time we see a news story about Covid-19, we shudder. Due to illness I wasn’t much on social media which in retrospect, is not a bad thing. Its good to take breaks from the endless cycle of bad news and social commentary. Of course Tim and I were glued to MSNBC throughout the Capitol Insurrection and subsequent impeachment of Orange Baby. Never, did I ever think it would come to this. I guess we liberals are a lot more out of touch with the apparently huge number of deluded people that still think the election was stolen and are angry. We are going to have to reckon with them one way or another but I am ashamed of the hatred, racism, and ignorance of those that believe the lies. They need help. Intelligence is finite, stupidity is unlimited.

So, other than endless TV during our confinement (and our addiction to the PBS series Poldark), we have done a lot of reading and walking around the village and along the beach, desolate and cold, and I have resumed strength training with my beloved trainer, Louise, who tries so hard to keep me on my feet and balanced. Last night we were able to babysit Jack so his parents, head coconut and Evan, could have a much needed date. Little guy is teething and feeling it! He is now 5 months old and every day with him just gets better and better, we love him to bits. 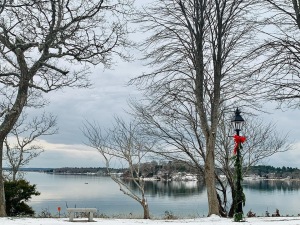 My work on the Board of Directors at Metavivor continues and we just announced that despite the pandemic, we were able to fund 23 new research grants totaling 3.6 million dollars that will enhance our understanding of MBC, improve current treatments, and develop new therapeutic options. I actually know women that have benefitted from recent ground breaking research that would not be alive without it. To be able to raise that kind of money during a time when fund raisers could not occur and everything went virtual is a feat!

Lastly, I commented on my friend Stephen’s post about the remarkable football player that was featured on 60 Minutes this week and Governor Charlie Baker commented on my post. See, I have friends in low places, kidding. I am beyond impressed with his handling of the Corona virus in Massachusetts and his dealings with the Trump administration (and he is a Republican). Also, a friend from the Broad Institute, Dr. Eric Lander was just appointed to Biden’s cabinet as his Scientific Advisor. I participated in a Count Me In video with him at the Broad for their MBC program. Continuing my advocacy for MBC patients has brought these unexpected rewards and I’m grateful.

Okay, enough with the serious stuff, yeah right! Tomorrow I have my scans and lab work at Dana Farber along with an appointment with my beloved oncologist Dr. Rachel. Am I scared? Are you kidding? Petrified but there is nothing I can do to change it. My greatest sorrow is that Tim will have to participate via Face Time, ugh. Never great to get news that way. In October my lung doc told him flat out that I had lung cancer while he sat in the parking garage and cried. Yah, hold onto that thought. I guess what I want to say is that everyone wants to live forever but time is finite, moments with loved ones fleeting. We can only live in the moment and the spaces in between. Tim and I are always on the lookout for tender mercies and the lengthening of daylight is one. The kindness and love I receive from all of you, whether virtual or in person, is everything. Don’t give up on hope.

Much love from all of the Bigelow/Renaud Family XOXO