You would be surprised how many people suggested I dress up as Eleven from Stranger Things–you are all on the same wave length it seems.

It has been an up and down two weeks. If you can remember back that long ago, my nice Norwegian oncology-endocrinologist decided to experiment with my steroids since my adrenal glands are not producing the really important one, cortisol. He decided to change my steroids to one that metabolizes quickly and is out of my system in the evening to see if going without the steroid overnight would  trigger something. In a normal person cortisol is lowest in the evening and highest in the morning and I of course, am showing no cortisol in the morning.

Tim and I were somewhat alarmed at this change of meds and asked to wait until our return from California to begin the grand experiment.  He said okay but was concerned enough at my non-existent cortisol to order a Brain MRI. Well, the good news is that I actually do have a brain and it appears to be cancer free!! No sign of problems with my pituitary so I started the change of meds on a Monday. Ya, that. I found myself now sleeping until 1:00-2:00 in the afternoon. By that Thursday evening I had a near blackout at the gym and had to sit for a while. On Saturday morning I woke up early, vomiting and dizzy.  Everything hurt, every muscle. I had a wretched day of this and had difficulty standing without my blood pressure dropping out. Saturday night I e-mailed Doc Rachel and she said to switch back to the old meds.

I was much better by Sunday morning. On Monday, I guess that little trip to the dark side opened the door and I developed the MOTHER of all head colds! So I stayed with my old meds, guzzled NyQuil and slept until my birthday dinner. We had a lovely time with the coconuts but Evan has decided he wants to be called Pina Colada and have his own category! 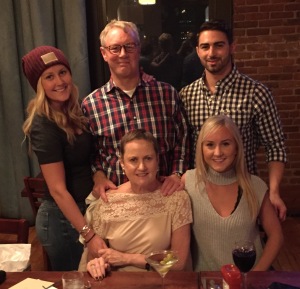 Needless to say I lived through another birthday and received a cool bracelet  from the little coconut that says “don’t ignore stage iv”, the date of my diagnosis, two hearts for the coconuts and a breast cancer ribbon. Portions of the sale went to Metavivor.org as part of a fund-raiser.

My endocrinologist still wants to experiment with my meds by changing the time of dosing and increasing it. Blanket was not happy and adamant we would not try this until after my next trip. Yup, it’s almost time! Head coconut and me are going to Aruba on Thursday, yay!!! Beach time!!! Seriously though, each time I have gone away I have come back stronger and healthier, more confident in my balance. It’s a good thing!

I was finally able to visit my advisory students! They are awesome and doing well in their senior year! I ended up spending most of the day at school chatting with faculty and students. Seeing kids makes me realize how much I miss them and how happy they make me. I ended that day with a presentation by the OAHS Field Hockey Team.

through the month of October. They had enough left over to donate $500 to Metavivor.org and they won the game!!!! They were cheered on by the OAHS Boys Soccer Team who also wanted in on the action as funny super fans! I went home feeling pretty euphoric after a tough week physically. I think I should get a job as a high school greeter and just walk around chatting all day.

which also supports MBC. It was a gameapoolooza! All the teams wore pink, they sold Team Bigelow tee shirts and bracelets, beads, baked goods, raffle tickets, and auctioned stuff. It was truly awesome and so much fun. It is times like this that I remember why I wanted to live in a small town. To see them pull together over something important like MBC is inspiring on so many levels. Kids have imagination and love to help. They won too and the other team gave them $400. Now that is sportsmanship! All together they raised over $3,600 for Side Out and made the playoffs–not too shabby!

After all this fun we needed a change of focus. Saturday night we were pleased and honored to be included in the DJ Henry Dream Fund Gala (thank you Carol and Stephen). It was DJ’s birthday which made it all the more magical for a beautiful young man needlessly murdered by police who should have been protecting, not shooting. His family has chosen to celebrate his young life every day by providing over 5,000 children with scholarships to participate in camps and athletics that otherwise they could not have. It was also an opportunity to catch up with former high school kids, now grown up, especially the beautiful Amber Henry. What struck me the most was the Henry family’s quote “What we do in life, echoes in eternity.” I could not agree more. They are words to live by, just sayin. 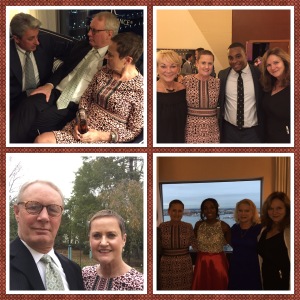 Onto more sobering thoughts after all this celebrating. I pretty much live in denial as a way to cope with my terminal illness. How else would I be able to carry on?  I am approaching the two-year mark with a less than %25 chance of living beyond 3 years. Of course, I hope I am the one that miraculously survives. But I do have moments when I let my guard down and my reality sinks in. When my sister died of MBC the funeral director told me not to watch when they came to pick her up. I couldn’t bear to turn away and I watched as they lifted her gently onto a gurney and zipped up the body bag, wheeled her out of the house and into an innocuous van. You would never realize the precious cargo within. I flashed on the thought recently that I would be the next one in the body bag and that image and how it would affect the coconuts and Blanket unhinged me for a moment. So yes, I do go there in my mind from time to time. It is a dark place.

When my dad died very unexpectedly the ER called and asked if anyone in the family would like to come and view the body. Surprisingly I was the only one who said yes. He looked so small and withered, all feistiness gone, nothing like he was in life. The same with my mother–her, but not her. It made me realize that the essence of what made them who they were was gone and what was left was just the vessel, not life anymore.

Sometimes as a game, Blanket and I play Lifeboat. If you only had 10 spaces who would you want on your lifeboat? (kids don’t count) It’s interesting how it changes. I know I want people who know how to laugh and make me laugh and know joy when they experience it. And cats!

If you ever think about me or want to reach out, please do not be afraid to. I love hearing from people especially the unexpected ones. There is nothing you can say that would offend me over my situation and I love hearing what other shenanigans people are up to.

The other exciting event in my world was getting to vote early. I voted at our little town hall, by paper ballot, and saw friends, Cathy and Ellen, there too. Unlike Adele, for me, it is over! I can now tune out the negativity and foolishness. Wake me up when it is over.

On to Aruba and lots of sunshine and salt water. See you next time, sometime in this life.

Love from the circus,

“What we do in life, echoes in eternity.”