It’s been a long two weeks. I was dreading, more than usual, the surgical procedure to implant an access port in my chest–nice vacation week! I guess the dread was because my last procedure, a liver biopsy didn’t go so great–doctor was rude (yes he called me to apologize) and it was yucky–and let’s face it, I am not getting younger–I don’t bounce off the table as quickly. Anyway, we have come this far so in the spirit of telling about it–viola!

It was sore and now, itchy as it heals. But…it was a great decision. Chemo this week was so much easier. I start every chemo with blood work to see if I am able to have chemo, followed by a visit with Dr. Rachel and then lunch while they make the toxic cocktail and then the actual chemo. It is a long f*^%king process. Up until now I had to have an IV put in my poor, tired right hand and the pain and anticipation was getting worse. Now they numb up my chest and put in the lines and have at it. This allows me to wander around Cancer House hands free–important when you go the bathroom, wash your hands, eat, and knit!! And it’s now painless! Yay for me and yay for the head coconut, Kelsey, for convincing me.

Enough about that. Chemo still sucks and I feel worse after each one. More exposure to the poison increases the side effects to which I have added peripheral neuropathy–a fancy way of saying my feet feel like they are on fire at night!!! I am not much for walking on coals but, yeah, that is what it feels like. I am resisting any more added medication to address this and my dr. mentioned I may have to lower my dosage of chemo–ah, NO to that idea. Onward we go. Lack of appetite is an ongoing problem, a cough and vomiting. Not much tempts me but this week peeps have brought some interesting food to me and I am starting to like sugary things instead of salty as my taste buds change. Oh hell, everything tastes weird,  let’s face it. I left work for the first time in a long time to go home and go to bed at 10:30 AM and slept until 2:30. Hoping that it’s not a regular occurrence for me or my work buddies. Everyday is like walking a tight rope–I never know if or when I might fall off. It’s awesome to live in uncertainty and chaos! 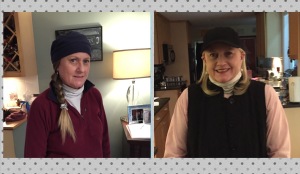 On another front I have been trying out some new looks at the insistence of my loved ones. Funny thing–they end up liking the thing I like most, soft hats! I could have told them that without the weird experimentation but no one listens to me anyway.

The highlight of the last week or so was of course, Elizabeth’s bridal shower.

So much love and happiness, family and unity. It was blissful. I had set myself a project to knit each of the ladies of the family a scarf–8 in total. It went to the wire but I pulled it off!! 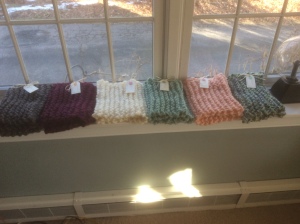 Ironically my niece Gina sent me a hat that exactly matches a cowl I had just finished. Great minds think alike. 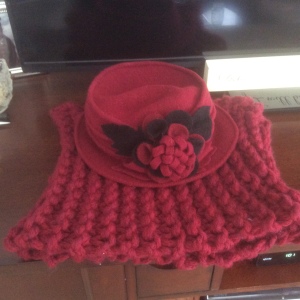 Now I need a big rest.

Another highlight was Valentine’s dinner with my brother and Diana–the limes. Today their daughter Kate sent me the coolest gift–it took me a minute to notice the label but I think it is just the best. 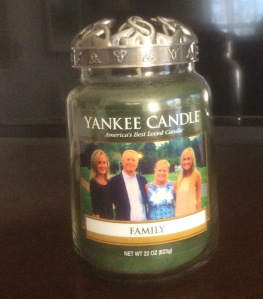 People are so thoughtful and creative, this I have learned while I am in this terrible place.

Some of you are aware that my BIG scan is coming up that will reveal if the chemo/clinical trial is working. I am scared to death and trying to guard against getting my hopes up. Tim Blanket and my doctor are optimistic but I can’t allow that myself. I have been spending a lot of time alone (because of not feeling well and school vacation) and it is very lonely inside my head thinking about the bad stuff. Impossible not to when almost everyday someone in my private MBC Facebook group dies and I know I will too.

I try to concentrate on the good stuff , like visiting with Arleen, lunch with Brunnie, a good movie, something funny the coconuts said and most of all try to be present. I think also a lot about Tim, how hard it is for him because he has the one and only front row seat to the really bad stuff and I worry about his loneliness after this is over. I could go on but won’t……Carla has to listen to this stuff mostly.

Speaking of Carla–she came yesterday with Adrianna and a boatload of home cooked food. I don’t eat this much normally! The freezer is stocked, the refrigerator is full, we are good for a while. No chance of becoming the Donner Party.

Life lesson for the girls this week–ask Lucy. I mean it. 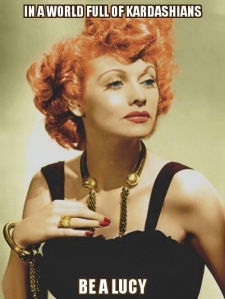 No chemo for another 10 days, a long work week ahead, the school play next weekend, Shannon’s bridal shower–lots coming up!

My song this week has absolutely nothing to do with me or my thoughts but I was surprisingly blown away by Kelly Clarkson the other night–it was a moment!