When last we spoke, Barb was climbing out of the rabbit hole into the light of day. Discharged on Wednesday at Noon and ready to roll. Only the rolling was all backwards, back into the hole. By 6 pm, Barb was having chills again, her fever was back and Dr. Rachel told us to come back in Thursday.

Back to the infusion room (at least she didn’t send us to the ER). Got some Zofran, fluids, but couldn’t keep her temp down. Then the violent vomiting. The infusion nurses were clearly not used to this. At one point there were seven clinical people in he room, looking on as if Barb was an interplanetary visitor oozing fluorescent orange goo. They were able to get a bed on the women’s oncology floor at “the Brigham” (“we’re baaack”).

IVs and many fluids. Barb was still nauseous and fever was up and down. Blood pressure was not stable. But seemed she was in good hands (“the Brigham,” not Allstate). Friday started out okay. Barb was loopy, didn’t know how she got there. But her temp and BP wouldn’t stabilize, so they sent her to the ICU.

I planned to come back in Saturday late morning. But Bridget went in early. And the texts began: “It’s not good. You need to come.” ….”Come now.” ….”She isn’t breathing right. So they are gonna do a chest X-ray.” ….”She keeps saying she wants to go home and die.”

This is not what I was expecting. Not yet. Not now. And Poor B, in the ICU in a Grey’s Anatomy nightmare. Terrified. On the way in I talk to a doctor who said her fever hit 106 last night (what the f#%k?). Needs help breathing. Barely conscious, talking gibberish, delirious. Levels all over the place and nurse Kelsey realizes they aren’t even giving her oxygen yet, so puts on a nasal thingy to help (are families now required to bring their own nurses to ensure quality care?). We leave Saturday night unsure what Sunday day would bring.

Sunday, B went in early again and called. Barb is “skating on thin ice,” she was told. A doctor calls me on the way in and uses the word “critical.” I have no idea if they throw these terms around casually or if they mean what I think they mean – and I don’t want to ask. Now she has a mask strapped to her head and looks like Batman’s nemesis, Bane.

She hates it. She is barely conscious but keeps reaching up to pull it off. We gently take her hands and put them back on her chest.  We keep telling the nurse that this is the fighter in her. The combative patient. What else would you expect from someone with a Lucille Ball complex? 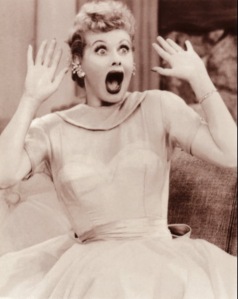 Still no idea what is going on. Is it an infection? Now they wonder if the Pembro (the immunotherapy drug) has short circuited her immune system to start attacking everything else in her body. If so, the treatment is steroids, so steroids are ordered.

But so much else is happening. The fluids they gave to get her BP stabilized has filled her with fluid. Her kidneys are failing, so she needs to go on a continuous dialysis machine. She needs to be intubated to stabilize her breathing. On Monday, her breathing is pressured, she is fighting the vent and they give her a temporary paralytic to stop her resistance (yes, paralysis, voluntarily initiated!!!). She now has pulmonary edema (fluid in the lungs). What the f#%k else can she have go wrong?

All the while, the coconuts and I are sitting vigil. Concerned that the treatment team might forget this is a person they’re treating, we start posting pictures of Barb and family on the walls and windows. The treatment team likes them. We start to give each team its own color so we can know who we are dealing with (gold for the nurses of course – but our favorite is yellow for the renal team).

Bridget and Kelsey begin writing daily updates to post on Facebook to keep everyone informed. We attend daily rounds and begin to understand how the mystery of medicine really works (these people really are amazing!!!). Dr. Rachel comes in daily to check up on Barb and interpret for us the complexities of what is going on (although nurse Kelsey has been pretty savvy with all of it so far).

Yesterday and today have finally brought some stabilization and relief. The steroids seem to be working. Bridget brought in Barb’s bag of tokens – representing some one, some place or some thing to bring good luck. 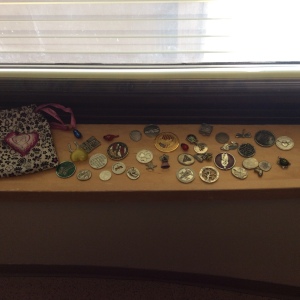 Today is Wednesday. Barb has been in the hospital for nearly two weeks. The vent is still in, she’s still on dialysis and she still is completely sedated. She is nowhere close to out of the woods (or rabbit hole, if you will). She would hate this if she knew what was going on, so it’s probably best that she doesn’t. They  say she has “grazed” the corner (instead of turned it). There is a long journey ahead of us. But we are, finally, hopeful.

A song from Rent. Sadly captures where we are today.